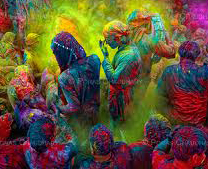 The Holi Festival of Colors is an important festival to those who celebrate the Hindu faith. It is celebrated annually at the end of winter, on the last full moon day of the lunar month Phalgun, which typically occurs in late February or early in March. This year, the festival will be observed from March 17th-24th throughout Nepal and India. Come with us a we review this cultural event and what makes it unique.

The festival, which has many purposes, celebrates the beginning of spring. In literature of the 17th century it was identified as a festival that celebrated agriculture and commemorated good spring harvests. Hindus believe it is a time of enjoying spring’s abundant colors and bidding goodbye to winter. For many Hindus, Holi festivities also mark the beginning of the New Year. It is also a time to reset and renew troubled relationships, end conflicts with loved ones and for individuals, couples, and families to rid themselves of negative emotional strains that have occurred in the past year.

There is a heavy religious purpose for the festival as well, symbolically signified by the legend of Holika. Holika was a demoness of Hindu Vedic scriptures whose story tells of the triumph of good over evil. The night before Holi, bonfires are lit in a ceremony known as Holika Dahan. People gather to take part in celebratory dancing and singing. The next day Holi, is celebrated. Children and youth spray colored powder solutions at each other, laugh and celebrate, while adults smear dry colored powder on each other’s faces. Visitors to homes are first teased with colors, then served with Holi delicacies, desserts and drinks. After playing with colors, and cleaning up, people bathe, put on clean clothes, and visit friends and family to celebrate a new year and a clean slate.

The official event in Nepal will be celebrated starting at 12am on March 22nd. For more details about the celebration visit welcomenepal.com.