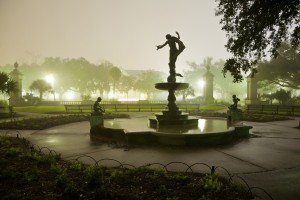 New Orleans is a city with both a rich culture and history. The National Register of Historic Homes in New Orleans lists more than 20 historic districts in the city, more than any other city in the United States. The styles of these homes developed over the course of several different architectural eras in our country’s history and show snapshots of time long forgotten. Here are a few buildings to explore when visiting one of our countries most unique cities.

Located at 501 Basin Street in New Orleans, Basin St. Station is a historical representation of what was once the transportation hub of New Orleans. It exists today as an example of the five railway stations and their associated buildings that served Downtown New Orleans in the early part of the 20th century. Over the last decade the station has been the focus of urban and economic planners who have worked to establish it as place for visitors to come and experience an authentic introduction to the city. More information about the station and its history can be found at basinststation.com.

If you are a Civil war buff, you might want to wander over to Beauregard-Keyes House at 1113 Chartres Street. This home, at separate times, belonged to two men who were significant in New Orleans and American history. The first occupant, Confederate General Pierre Gustave Toutant (P.G.T.) Beauregard was a New Orleans native who ordered the first shots of the Civil War fired on Fort Sumter, South Carolina in April 1861. Frances Parkinson Keyes was a noted author of more than fifty books and short story collections. More information can be found online at bkhouse.org.

If you are inclined to seek out something a bit more artistic in design, head on over to Esplanade Avenue to check out the Degas House. Located near City Park near other stately mansions, the recently restored House was the home of maternal family members of Degas. The artist lived in the home from 1872 to 1873 during which time he created 18 paintings and 4 drawings depicting his family. These paintings ultimately secured his spot in the Impressionist School and solidified him as the artist we know today. The house, which is on the National Register of Historic Places, is open to the public for tours as well as overnight stays. Information can be found at neworleansonline.com or by calling 504-821-5009.