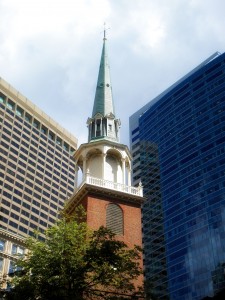 Boston has long been recognized for its culture, history and even its food. For this reason, millions of travelers from the U.S. and around the globe make Boston their final destination for travel and vacations year round. In the spirit of learning more about travel, we invite you to come with us on a review. Coconut Club Vacations invites you to explore one of Boston’s most popular attractions and what makes it so special.

The Freedom Trail is as 2.5 mile long trip back in time in the heart of historic Boston. Making its way through the most historic part of the city, this number one attraction stops at 16 different locations which are significant to the history of our nation. These historic sites range from churches to museums, but all help to tell the story that is America.

The Freedom Trails is supported in part by the Boston National History Park in addition to the Freedom Trail Foundation. Founded in an effort to protect and share this part of history, it has received numerous awards over the years including the designation of a “Millennium Trail” in the year 2000 by the First Lady at the Time, Hillary Clinton. The trail has also been named the number one historic attraction in New England, attracting over 4 million visitors annually as well as being name a Dog Friendly attraction and a winner of the Certificate for Excellence from TripAdvisor in 2014.

The Sites 16 sites of historic significance include:

In addition to these sites, plenty of other historic sites help tell the story of our nation as well including the Liberty Tree, the Black Heritage Trail and the John Adams Courthouse.

A food destination you won’t want to miss

It is easy to know where to go to learn and recreate when traveling in Boston but you have to eat as well. While there are hundreds of great places to eat, one of its most popular is Asta. Named 2014s Best of Boston in terms of General Excellence, Asta, on Massachusetts Avenue is known for its creative and tasty foods alog with a quirky and inspired atmosphere.

No matter when or where you will be traveling, be sure to get to know more about your destination before you go, you will be glad you did.