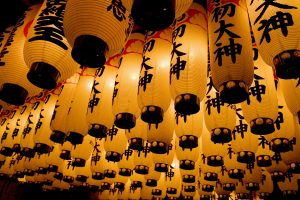 The Gion Matsuri is a festival of Yasaka-jinja Shrine that takes place annually in Japan.

Typically the festival lasts the entire month of July and has a number of activities and events that are associate with it. The highlight of the festival is the culminating pageant of a number of floats called yamaboko that proceed along the main streets of Kyoto on the 17th and 24th of July. The downtown area is reserved for civilians on the three nights preceding the festival. During this time the streets are lined with night stalls selling food, people dressed in traditional Japanese attire, and the community joins together to celebrate this special event.

The festival is thought to have originated as a purification ritual to appease the Gods of fire, floods, and earthquakes. In 869 AD there were so many people who were suffering from plague and dying that the Emperor Seiwa ordered the people to pray to the God of the Yasaka Shrine. There were sixty-six halberds that were decorated to represent each province in Japan. They were prepared and placed in a garden along with portable shrines. Each time there was another outbreak the practice was repeated in hopes of keeping the bad spirits at bay

During the culminating parade…

The floats often have sails that reach more than 25 meters tall and are topped with a long pole shaped like a spear on which they display exquisite craftwork of woven fabric, dyed textiles and sculptures. The pieces are so ornate and beautiful in nature that they are sometimes described as ‘mobile art museums,’ by the locals. In addition children are often found in costume and make-up on the leading float, Naginata-boko, and musicians playing the flute, drums and bells are seated on the second level of the floats.

Another interesting aspect of the festival is the fact that during the week leading up to the parade, the local merchants and residents open their doors to the public, exhibiting their valuable art collections. This event, known as the “Folding Screen Festival,” is a precious opportunity to visit and observe traditional Japanese residences of Kyoto.