Warning: Constants may only evaluate to scalar values in /home/coclvane/public_html/wp-content/plugins/easy-fancybox/easy-fancybox.php on line 40

Warning: array_key_exists() expects parameter 2 to be array, string given in /home/coclvane/public_html/wp-content/plugins/easy-fancybox/inc/class-easyfancybox.php on line 208

Sometimes we all need to experience something out of the ordinary.

To remind us of what a wonderful craftsman Mother Nature can be. These beaches are not only awesome places to swim but their aesthetic beauty is something to experience first-hand. 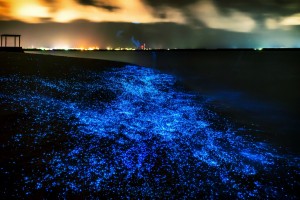 There is a glowing beach in the Maldives that looks like something out of a Vincent Van Gogh painting. The beach, which at night is lit in brilliant hues of blue, is a phenomenal image to behold. The glow is said to come from ostracoda crustations, a small shrimp-like species, that inhabit the area. Some ostracods have a light organ in which they produce luminescent chemicals. The light has two purposes: it can be used as a predatory defense, and it is also used for mating. These ostracods are called “blue sand” or “blue tears” and glow brilliant blue in the dark at night, creating a beautiful landscape.

In Western Australia there is a beach that has been dubbed “Shell Beach” because of the abundance of the shells of a cockle species Fragum erugatum that line the beach. The beautiful snow-white beach is made up of millions of these fossilized shells. In some areas of the beach the shells are 33 feet deep and stretch over roughly 75 miles. These beautiful cream colored shells are the remains of the cardiid cockles that thrive in Shark Bay’s salt water. Once upon a time these shells were collected to be used to build office walls in local buildings, some of which still stand today.

The beautiful Las Marietas Islands are located about 22 nautical miles west of Puerto Vallarta, Mexico. The islands are home to a nationally protected bird sanctuary, were the subject of study by Jacques Cousteau and are considered a national park for the country. One of the islands, Playa de Amore, known as Hidden Beach, is a beautiful result of a destructive act of man. The beach, which looks like a crater in the middle of the water, was formed by a bomb that exploded during military trials in the mid-1900s. The result of the explosion is a stunning beach, somewhat hidden away from the world. To reach this amazing island paradise requires visitors to swim through a short tunnel that opens to the beach on the other side. The government has done its best to maintain the ecosystem of the island by outlawing fishing and hunting on the islands.

Distinctive and different, each of these beaches offers a unique experience for its visitors.